These findings are part of the latest survey report put out by the National Sample Survey Organisation (NSSO).

“Private hospitalization costs have been increasing continuously. The only reason people go to private hospitals is because government hospitals are so few and under so much pressure,” says Amit Sengupta of the People’s Health Movement.

About 86% of the rural and 82% of urban population is not covered by any kind of health expenditure support, whether government funded or private insurance covered. This means that the high hospitalization costs would substantially affect the family’s budget in a majority of cases as incomes are not very high. 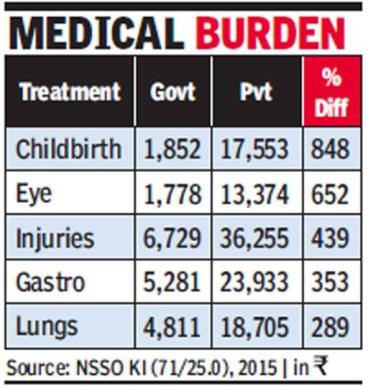 The healthcare sector all over the world suffers from an “information asymmetry”, according to Sengupta. This means that patients have practically no information or even competence to know about costs or make a choice about treatment. The doctors and hospitals have all the information and competence. This always leads to inefficiencies, escalated costs and even malpractice, he said.

“The only way to bring down private healthcare costs is to have a robust public healthcare system at no or nominal cost to the people. Look at the National Health Service (NHS) in UK – because of it, only a minuscule number of people go to private providers,” Sengupta asserted.

You no doubt have heard of the resurgence of leeches, used in modern medicine to heal wounds. Other crazy ideas are gaining acceptance, too. We list them here, from the tamest to the hardest to stomach.

There was a time not too long ago when you’d be crazy to jog through the city in bare feet. Well, you’d still be crazy, depending on the amount of broken glass in your path. But the notion of running barefoot even on hard surfaces isn’t as absurd anymore. In fact, barefoot running might be better for your shins, knees, hips and back.

Studies are not conclusive, but more and more researchers are advocating for ditching the running shoe. At issue is that the running shoe, since its debut in the 1960s, has altered how the human body runs, forcing the runner to land heel to toe. In a natural barefoot stride, your foot lands on its ball and lateral ledge, spreading out the impact. Humans have run this way for several hundred thousand years, and pre-humans did so for likely a million years prior to this.

A study published in the journal Nature in 2010 demonstrated that running in running shoes heel-to-toe sends a shock up your legs that’s virtually non-existent when running barefoot. The debate over this issue is fierce, though, as you might imagine it would be when it involves a billion-dollar industry.

Don’t forget to scrape your tongue, mother always said. Well, maybe your mother didn’t say this, unless you grew up in India where tongue scraping is a daily ritual for many, part of an ancient health code called ayurveda. The practice entails placing something that can resemble a small toilet brush as far back in your mouth as your gagging reflex will allow and scraping your tongue clean for several minutes.

It can hurt a little, particularly when you first start. And it can smell rather nasty, too. But there’s a payoff. Dozens of studies — even ones conducted in the West — demonstrate that this is one of the most effective means for curing bad breath.

Tongue scraping also reduces the chances of developing dental caries, gum disease and even colds. Note, however, that tongue scraping’s usefulness doesn’t open the door to all ayurvedic practices, such as drinking cow urine for what ails you.

This spring, you can treat your allergy and asthma symptoms with the conventional cocktail of drops, pills and inhalants. Or you can get yourself infected with hookworm. Researchers are coming to grips with the dirty notion that intestinal parasite infections protect against allergies and perhaps even Crohn’s disease and multiple sclerosis. The lack of such parasites in industrialized countries in fact might explain the skyrocket rates of severe allergies.

Some patients have been cured of allergies by purposefully ingesting parasites, such as hookworms, or otherwise walking around barefoot in muck to catch something nasty. For those of you adverse to swallowing hookworms and allowing them to wiggle under your skin, scientists are trying to understand what these creatures do to the human immune system so that they can mimic that action with a drug. Note, however, that thousands of people die annually from hookworm infection; death might not be the allergy relief you are after.

Maybe you are on someone’s crap list. That could be a good thing. Fecal transplants — in which doctors inject several teaspoons of a sample of fresh feces into a person’s gut via a tube in the nose (yes, teaspoons) — are a rather effective cure for Clostridium difficile infection (CDI) and related diarrhea-causing bacterial diseases. How doctors stumbled upon the procedure is anyone’s guess.

The practice is also known by the marginally less gross euphemism fecal bacteriotherapy and is related to probiotics, the infusion of “healthy” bacteria into the gut. Doctors are eyeing this technique to reverse symptoms of Parkinson’s disease and diabetes. Much of the research is being conducted down under … in Australia, that is.

Vibrating exercises platforms have long been regarded as scams, but now they are shaking up the exercise industry, as well as the folks using them. The gist is that you stand on a vibrating platform for a few minutes and then jump off to do your exercise. The vibration is supposed to help you go faster, higher, deeper, or whatever comparative adjective you are after. And it does, albeit marginally, but no one understands why.

Even more intriguing is that vibration machines can help muscles heal faster and, in older people with osteoporosis, build bone density. What’s lacking, for now, is research on the proper “dose” — that is, the strength and length of the vibrations. Note that these vibration machines aren’t cheap. At $2,000 apiece, they’ll shake the change right out of your pocket.